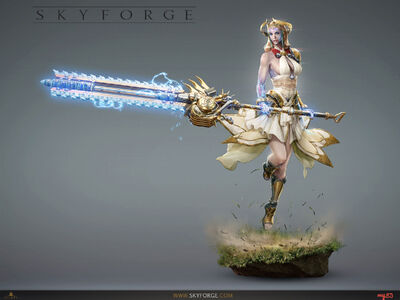 The Divine Form is you entrance into the main game, and character progression. Once the player has accumulated enough "Faith" after finishing their New God quest and obtained Divine Form, they can change into this form and bring massive damage and new abilities into the fight. When you first obtain Divine Form, you can only remain in that form up to 15 minutes, but this cancan significantly tip the scales in a battle of any nature. Over time you can extend the duration of which you can remain in Divine Form, by developing your "Halls of Gods".

Do not expect to be the only player to go into Divine Form; and if another player does, expect a fight for the ages.

Faith is a currency resource for the Gods to allow them to transform into their Divine Form. Faith can be obtained from your Adepts, or after you have received 100 daily "Survivors". The maximum that can be accumulated is from 1,000 to a total of 2,000 Faith at any given time, depending on your Premium Rank.

Divine Deeds are the resource currency required to unlock new nodes in your Halls of Gods. Divine Deeds are earned by completing Region/Squad/Group/Party/Invasion adventures while in your Divine Form.

These abilities are able to be used outside of Divine Form and consume Faith. To access these abilities the player must press the Alt key.